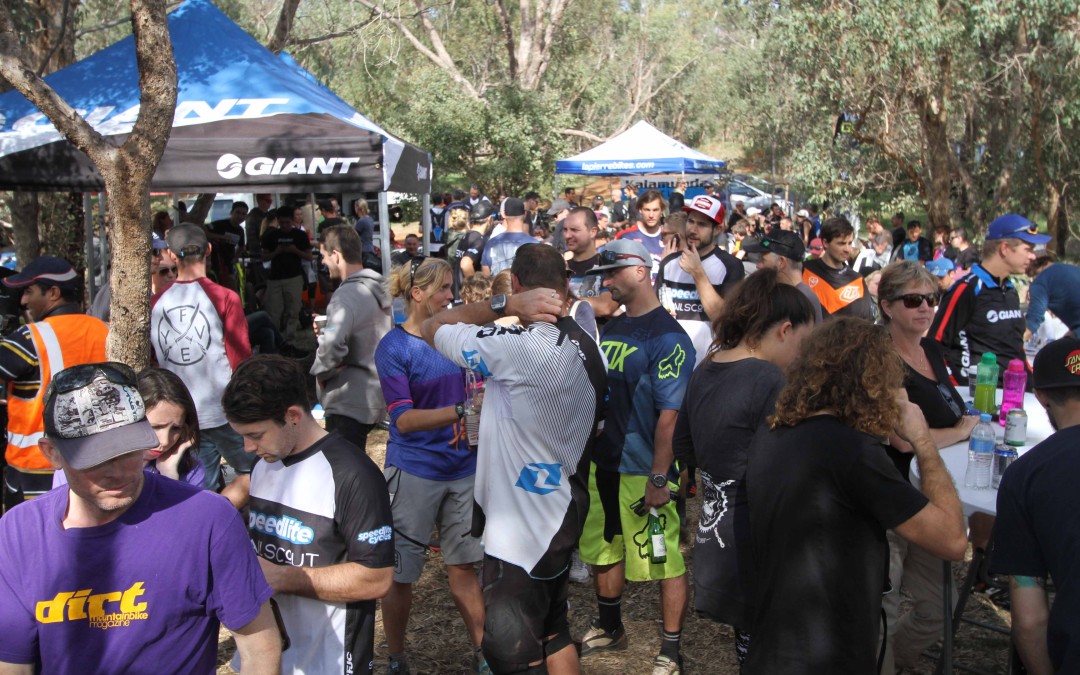 With the Australian sun beaming down on 200 spectators and almost as many competitors, conditions could not have been better at the Goat Farm Mountain Bike Park in the ‘wilds’ of Western Australia. Living up to its reputation as a Mountain Biking destination, as WA Gravity Enduro hosted round 4 of the MTBA National Gravity Enduro Series.

The Goat Farm Mountain Bike Park, Western Australia is one of the closest mountain bike trail areas to the Perth International Airport, which made access quick and easy for the interstate riders taking part. Conditions could not have been better in the lead up to the weekend, being a sunny Autumn day with a top of 20°C for both Saturday’s afternoon practise session and racing on Sunday. 180 competitors and 200 spectators ensured they day was filled with exciting competition and a great cheer squad! Devin Stafford was the man of the hour, powering home to victory.

After months of planning, design, testing and building of the course, rock gardens were a prevalent feature, testing riders’ choice of A and B lines, plus a trucked-in slopestyle jump, raw off-camber turns, smooth and fast sections incorporating jumps and steep berms, plus a 4x track which spectators and riders lapped up sitting in the trackside licensed area. WA Gravity Enduro incorporated 5 stages into the National Gravity Enduro race, and each stage had a unique mix of the infamous ‘ball-bearing’ pea gravel, hard compacted soil, and huge granite boulders all taking place in a dedicated mountain bike area. WA suits the gravity enduro format extremely well, as the shorter elevation means multiple stages can come in close proximity to the race village which makes for exciting spectator opportunities and a lively atmosphere.

The local riders didn’t disappoint, with the likes of Jimmy Pritchard, Jordan Prochyra, Devin Stafford, Sam Rubery, Holly Baarspul, Claire Garcia-Webb and Penny Holmberg ensuring WA firmly applied a strong presence and tough competition in the 180 competitor field. After closing Stage 1 due to the extraction of an injured rider (who is now recovering well), time limited the racing to 4 stages. The fastest rider of the day was Christopher Panozzo from Victoria clocking in 9mins and 5 secs, closely followed by local under 19 champion Sam Rubery with 9min 14secs, with Jaclyn Shapel clocking up 11min 47s for the Elite Female with local speedster Penny Holmberg only 55 seconds behind. Go big or go home. Australia is renowned for its huge features…

Jaclyn Shapel, the Female Elite winner for the day: “WAGE always put on a great event. Each stage had its own challenges and the techy new sections really kept it interesting and the brain pretty busy trying to remember everything with such tight practise times. Pleased to do well against some fast locals and so great to see some many people out racing and having a great day. As always the beer garden presentations are a massive highlight!“

“Big thanks to WAGE for putting on a fun event, the stages were great, you could really throw the bike around and push with plenty of fast turns and off camber, if only more races were like this!” Chris Panozzo said. And from Male Masters winner Devin Stafford “The WAGE team just keep stepping it up a level each race in a and are really driving Enduro racing in WA. With the creative and varied trail design they showed there is plenty of fun and life in the Goat Farm. A sensational day all round with great trails, weather, people, organisation and some close racing.” Results for this round can be found here

For further information regarding the MTBA National Gravity Enduro Series, head to enduronats.com

This report has also been published on eht MTBA website here