It can be overwhelming and nerve-racking starting something new, but we are here to help welcome you into the awesome Enduro Community with ease and excitement! Our events are a part of a Series and in order to be a Series Champion, you will need to complete a minimum number of events. However, anyone can enter any event at any time and there is no qualification to race.

Enduro Mountain Bike Racing is the hunt for the best mountain bikers who can adapt their technical skills and physical fitness across different mountain bike terrains. Competitors are assigned a number of different ‘special stages’ which they must complete and are timed. One of the best things about Enduro is competitors can race alongside family and mates and rub shoulders with the worlds best in the same race, with the opportunity to post your fastest time. Each competitor has the opportunity to set their fastest time down the ‘special stage’ as competitors are released one-at-a-time, usually 30 seconds apart. 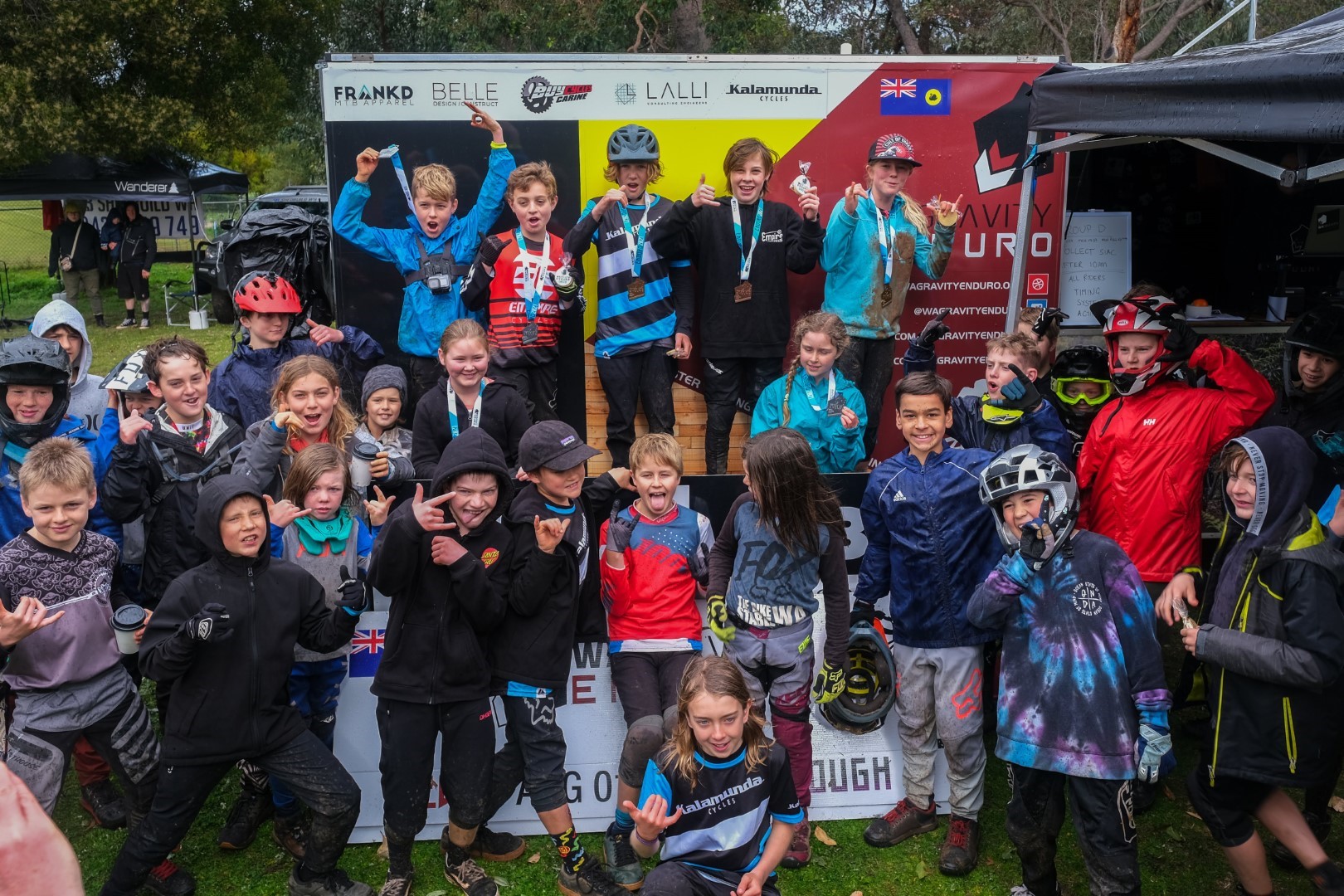 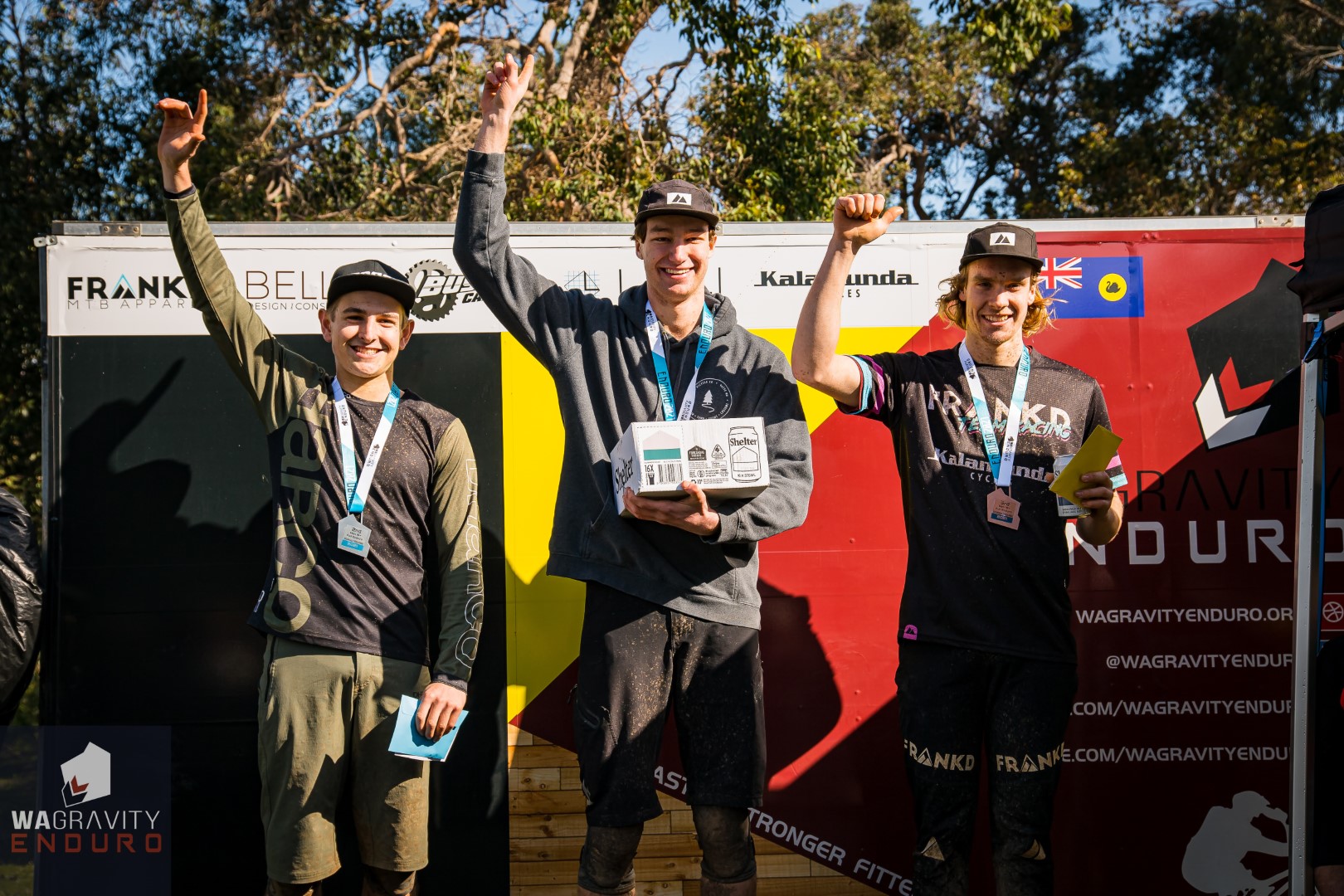 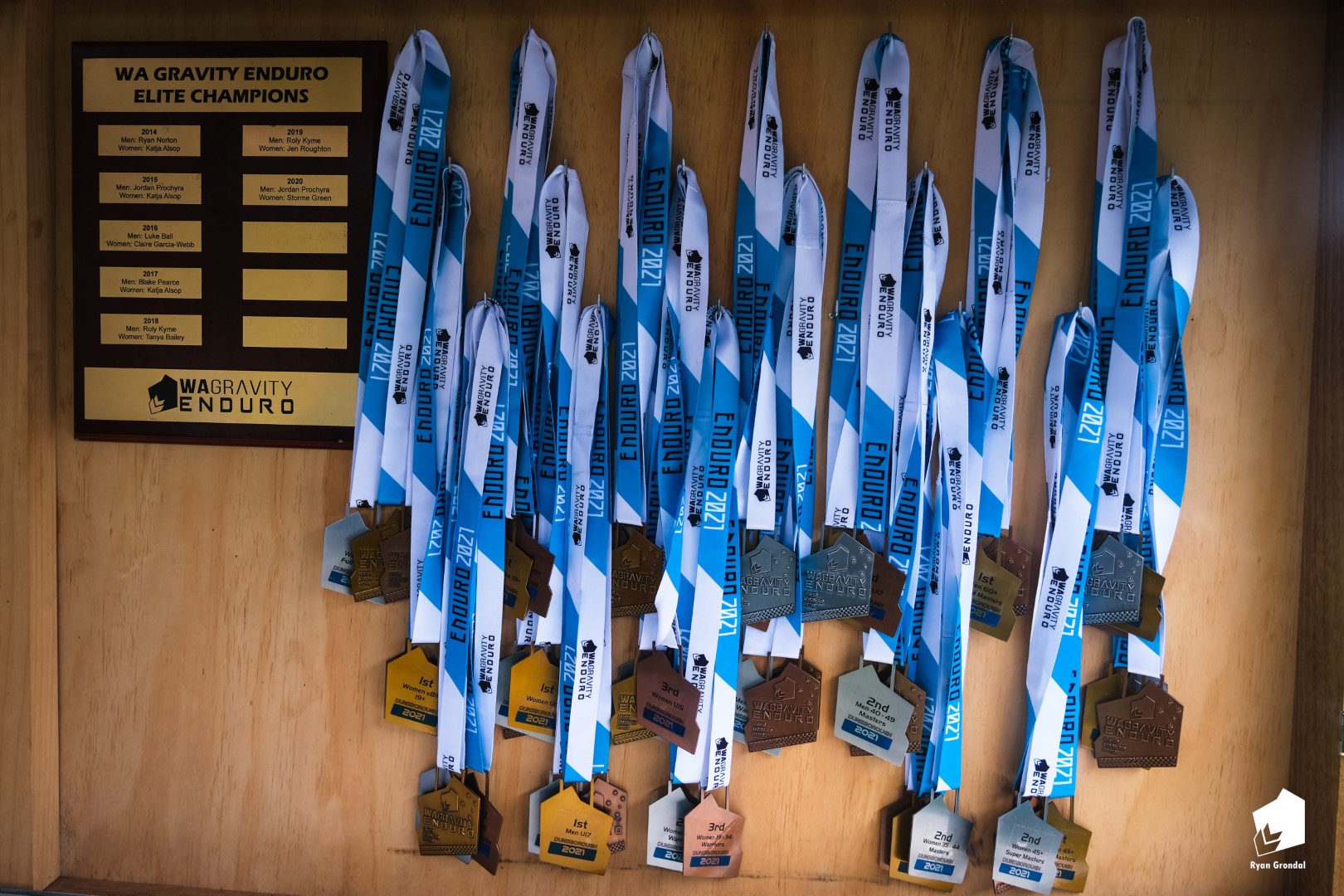 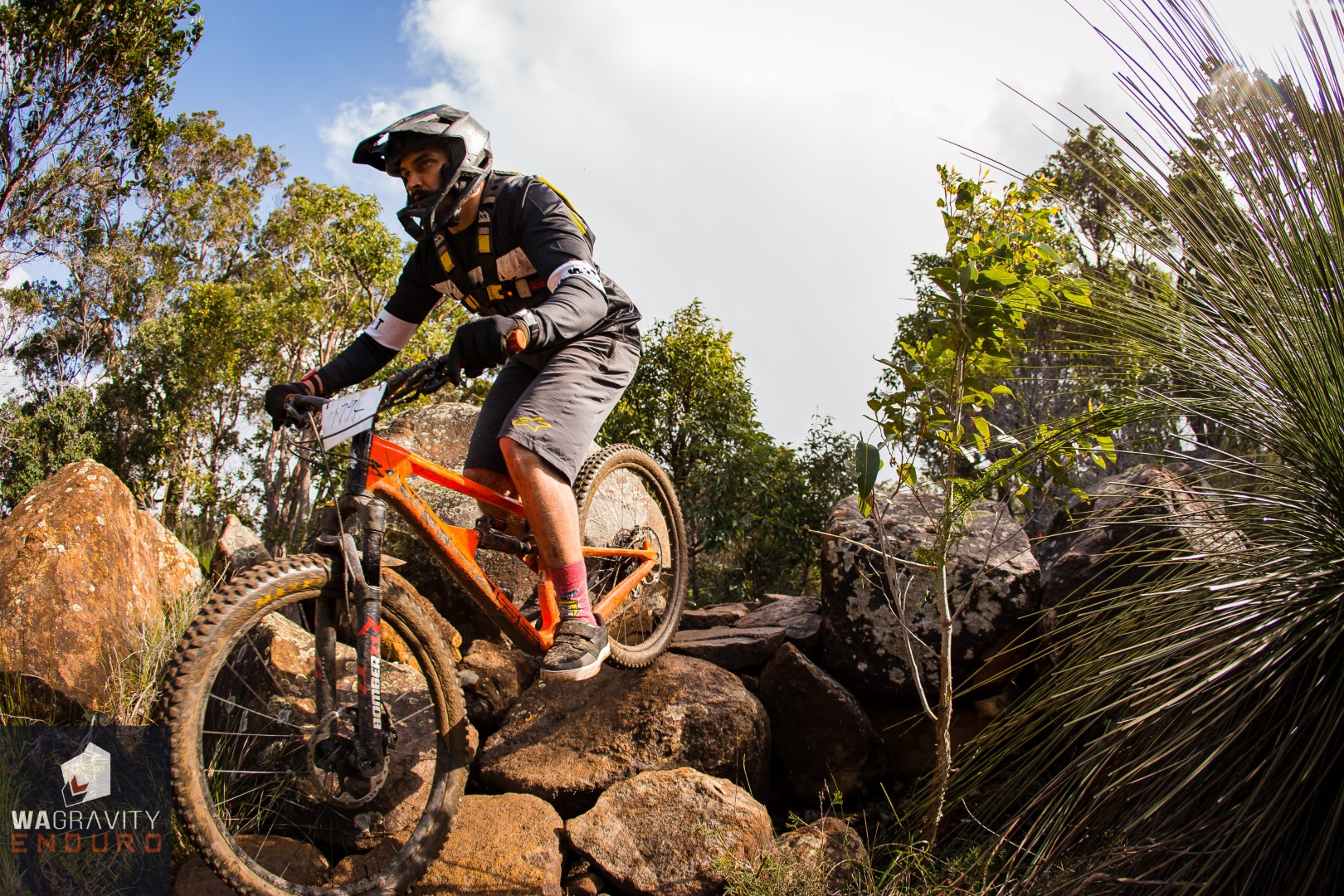 As our events are sanctioned through Auscycling, all competitors must have Auscycling Insurance. Insurance allows you to use our on-course Medic Services (St John Ambulance) and allows competitors to make claims.

Auscycling offers a number of Insurance Options for Competitors

If you are not affiliated with a Club, please enter ‘Western Trails Alliance Inc’ when requested during signup. It is free and helps support local trail builders.

We strongly encourage anyone riding a bike (particularly our ‘Shadow’ riders) to have Auscycling Lifestyle Insurance. It’s very affordable and will help us ensure all riders on the trails are covered, protecting WA Gravity Enduro, the landowners and all affiliates and helps grow our Sport by supporting Auscycling.

The Off-Road is the best Membership for Mountain Biking and will even cover you during recreational riding.

Once you have your insurance confirmed, make note of your Auscycling Membership Number to enter it into EntryBoss (see next steps).

2) Get your Equipment Ready

Your bike must be in good working order, handlebars with endplugs and brakes working front and rear. More information here.

You must also have a Full Face Helmet. Helmets with detachable chin-guards are permitted. More information here.

3) If an event is available on our website (Round 1, Round 2 and Rider Development Weekend), head to the Event page to enter.

4) All other Rounds can be entered through Entryboss. You will need to initially create a profile.

https://entryboss.cc/calendar/wage and be sure to read the information in Entryboss and our WA Gravity Enduro Event Page for further information.

Entries are limited and we may sellout before cutoff times. Please enter no later than the Tuesday before an event weekend. This gives us time to prepare catering, your custom raceplates and calculate time schedules and planning. 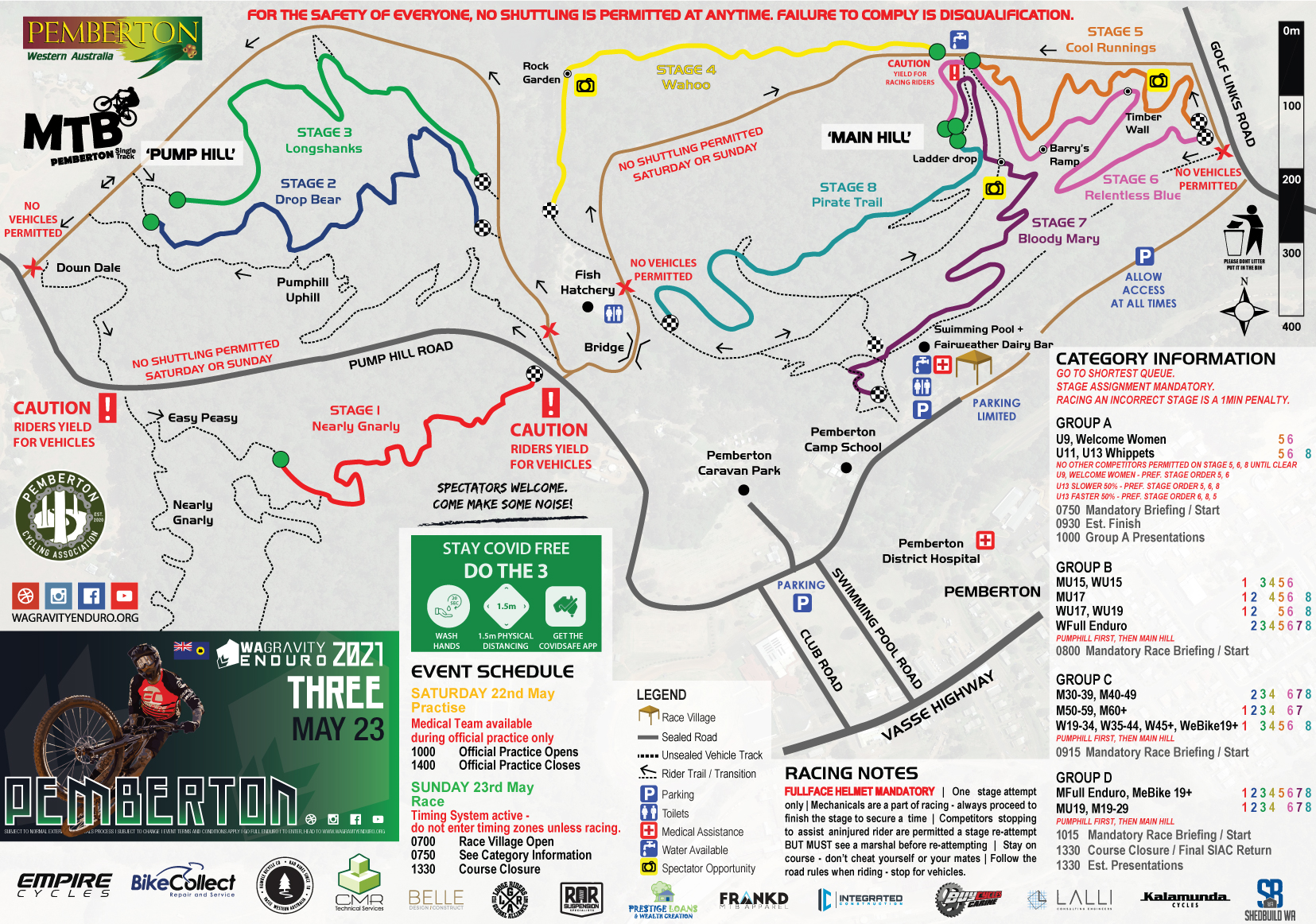 The excitement might be starting to set in now!

On Monday before an event weekend, we release the Course Map. The Course Map has all information required for you to get the the Race Village and plan your race. You will see your Category, a Mandatory Race Briefing time and the stages required. Due to the size of our events, we release competitors in Groups with varying start times to space out competitors to reduce queue times and manage the competitors on course.

We advise arriving at Race Village about 15-30mins before Race Briefing. If you are a new competitor for the year, you can collect your raceplate. Existing competitors for the year must bring their existing raceplate. At Race Village, you will also be issued a timing band, also known as a SIAC, which stores all your race data. Look after this – damage or loss means you will lose your race data (no times available) and you will be required to pay a $120 replacement fee.

You must attend Race Briefing. It has critical last-minute information which may change your race, particularly if course conditions have changed. The Race Director may also have you ride in an order which must be followed, or free order where you head to the shortest queues to complete your required stages. Beware – completing an incorrect Stage can be a 60 second penalty!

Once you have finished completing your stages (only 1 attempt per stage), competitors return to the Centre of Gravity Trailer to return their timing band and recieve a printout of their times. Not until all competitors return can be know how you placed among other in your category.

Sometimes, food is also available for our Competitors. Make sure you select food during the Entry Process as we can only cater for those who make the selection, and there is no additional charge.

And finally, (and hopefully!), it’s time to brag to your friends that you beat them down the hill!

Race Briefing – a mandatory session where the rider must be present to listen to all information by the Race Director. This information is critical for the safety of the riders, spectators and marshals, and to ensure rules are adhered to for the fairness and enjoyment of the race.

Sanctioned – official approval eg sanctioned trail is a trail which is approved for use by the land manager. Sanctioned event is an event authorised to proceed by the approval organisation

Shadow Rider – a guardian rider riding accompanying an U18 competitor, usually only if the competitor is young and/or new to racing. Shadow riders must ride behind the competitor when racing on a Stage. A Shadow Rider must have Insurance and we recommend Auscycling Lifestyle Insurance at only $7 a month. A Shadow Rider must have some experience with mountain biking, should have a bike in good working order and in most cases, should wear a fullface helmet (which is mandatory at Private Venues).

Shuttle – a bus and trailer service where a rider can load their bike on the trailer, sit in the bus and driven to a location (usually highest elevation point)

SIAC – Sportident Active Card. This is the Timing Band fitted to a competitor’s right-wrist and stores the race data throughout the course.

Special Stage (also known as a Stage) – predominantly a downhill trail which is timed. These ‘special stages’ are selected by the Course Coordinator based on perceived abilities of the majority of competitors. For example, our younger categories (Whippets U9, U11 and U13) are required to race 2 to 3 of the easiest ‘special stages’ available, whereas our Full Enduro Competitors (Elite) must race several stages.

Waitlist – a competitor has paid and entered an event but does not currently have a timing chip allocated as the event is over-subscribed.

Whippet – a WA Gravity Enduro competitor under the age of 13