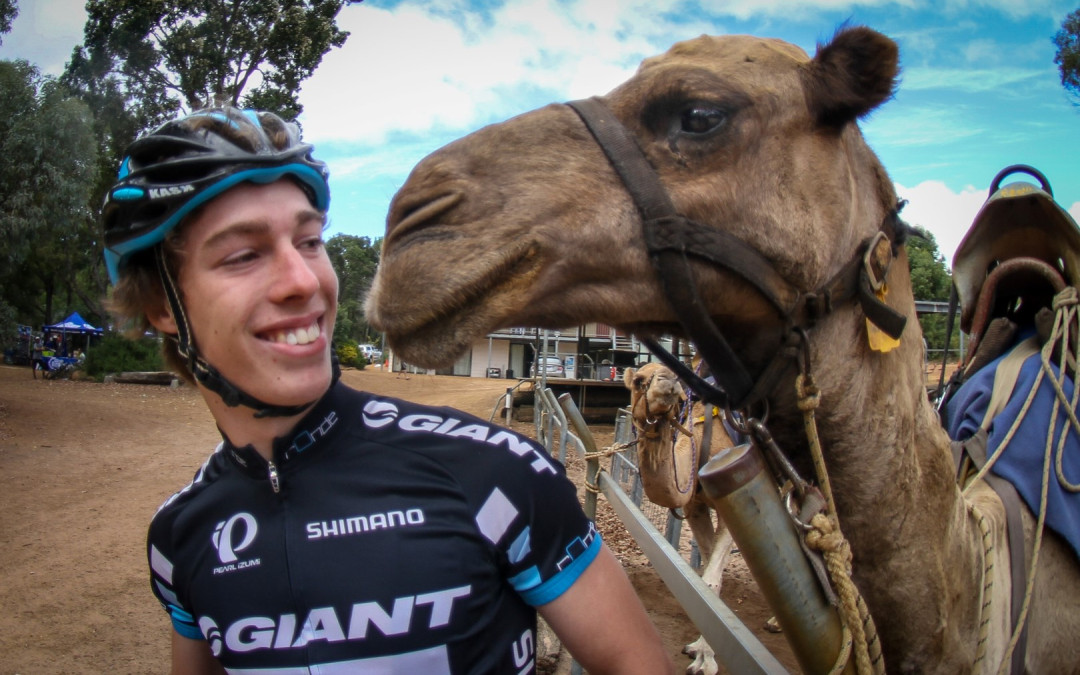 Round 2 of the CRC WA Gravity Enduro series saw the popular trails of Kalamunda testing skills and endurance in perfect riding conditions. With the race village situated at the Calamunda Camel Farm, the course was different to last year’s national round with no Mt Gunjin trails used, but plenty of old favourites thrown into the mix.

With the race being capped at 200 riders to ease waiting time, entries were sold out quickly showing the series is a hot ticket amongst riders. 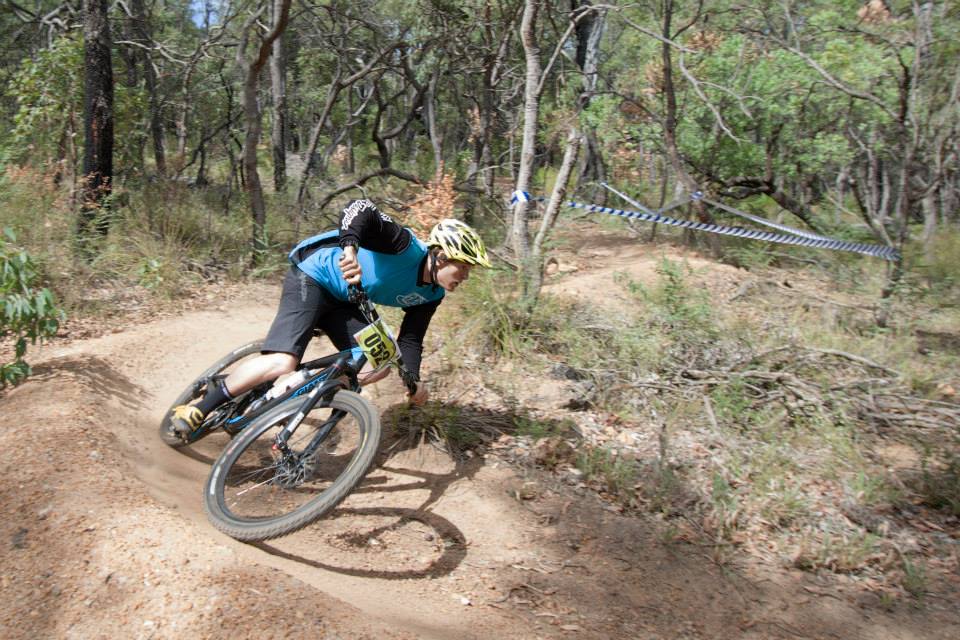 Jimmy Pritchard leaning into a berm on Goldilocks, Jimmy is contesting rnd 1 of the EWS in Rotorua this weekend with a bunch of other lads reppin’ WA. Chur bro!!! _pic: Jodie Berry 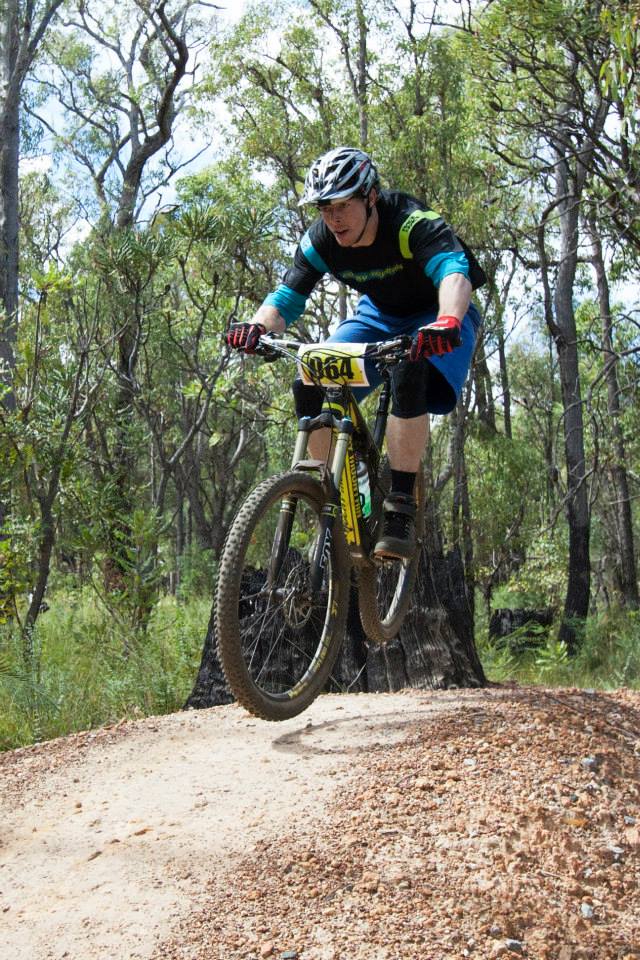 Riders were once again split into two groups with ‘A’ group doing stages 4,5,1,2,3 and ‘B’ group doing 1,2,3,4,5. Stage 1 saw riders leave the race village and head to lower half Camikazi. Riders were met with pedally rocky sections and little kicker jumps most of the way down with a few tight sections and once at the bottom, riders had to make a tight left and fly down the fire road with a nice sweeping right hander with a choice of a loose inside line or outside rut where racers could rail like berm and carry speed to the tag off. Who touched their brakes?
Stage 2 was the short and sweet Lancaster, a fairly easy descent with jumps and ladder hucks, with some guys carrying their speed to the point where they would just gap the whole ladder! At the tag off some riders were surprised at how buggered they were from such a short but intense stage. 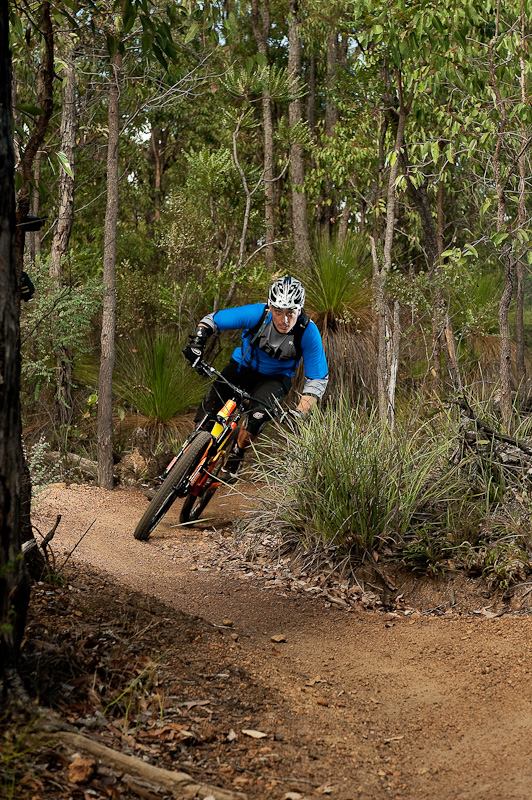 After crashing the day before and copping a bar end to the throat Ryan Litterick stormed to respectable 6th. _Pic: Mathew Farrel

Riders then had to ride up ‘Lube Me Up’ to stage 3 where they were met by Tyler Fletcher (a young champion who couldn’t race because of injury so he stepped up and marshalled…legend in our books!). Stage 3 was down Scorpion with its iconic rail sleeper berms all the way down to the road crossing into the Pines where riders hit warp speed and boosting the kicker, carrying speed into the blown out left corner before tagging off. 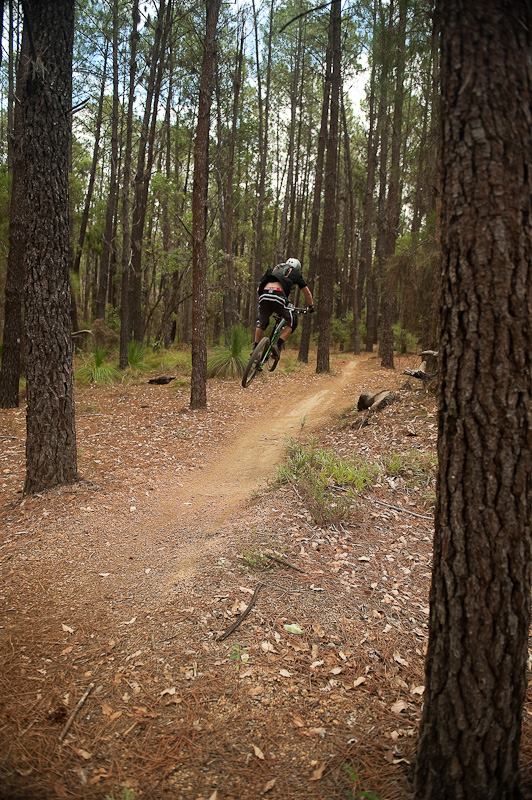 Bill Carruthers absolutely flying on stage 3. The jump is out of the frame, thats how far Bill launched. 2nd in U19s and with the next round at Golden Grove could he take the next step on the podium? _Pic: Mathew Farrel

After stage 3, riders were faced with the longest transition riding a combination of trails that made their way up to the top of Mt Gunjin. Once here riders took the chance to take breather and reset themselves for stage 4, which was part of last year’s national round with a slightly different start. The start was set on the side of Gunjin road so riders could pin it straight into the loose corner that leads into the old staircase trail, a few riders being caught out on the corner and not sure on what line to take on this short fast descent compared to some of the experienced riders who revelled in this oldschool section. From here riders had to make a sharp right into 3 Bears, carry speed across the powerlines and into the long pedally Mercury St. 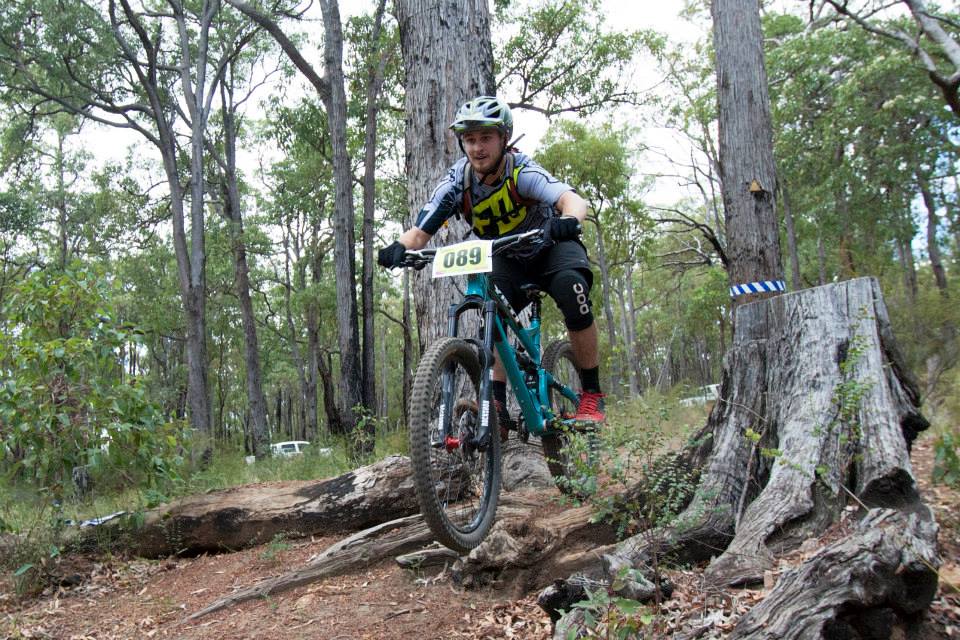 After helping all Friday with the course set up Rikkie Zoutenbier had no issues with the staircase. _pic: Jodie Berry

Stage 5 started after another slog up to Mt Gunjin. Stage 5 started at the entry in to Goldilocks which is a fast descent with a heaps of berms – from here riders took the big left berm into Muffin Tops navigating through a few rocky sections into tight flat right hander. From here riders could open it up and pin it all the way down over tabletops and kickers to the tag off which was situated just before the trail started to meander up slightly. 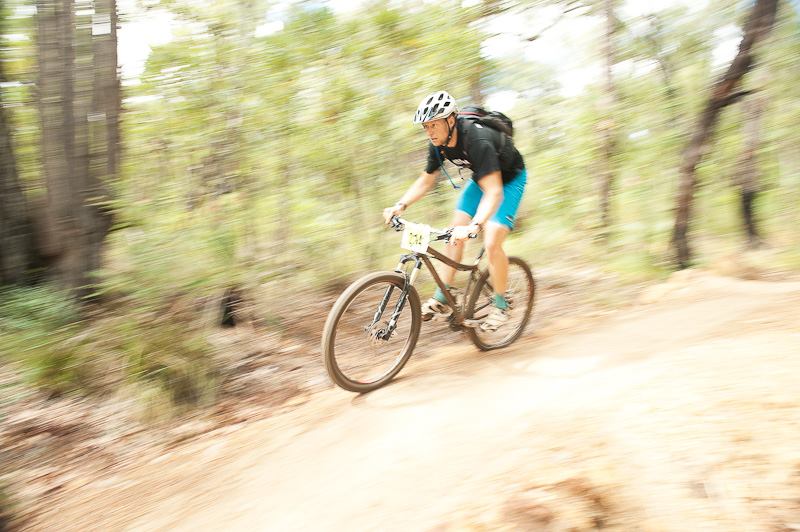 Allan Crisp on his hand built Ti bike with his very own engineered Crisp Brakes. Crispy is a riding animal often keeping up with guys down dh trails on his own creations. _pic: Matthew Farrel

The race village beckoned for the racers, where they were treated to a free sausage sizzle, fruit platters and they rehydrate with some sports drink provided by one of our awesome sponsors High 5 Sports Nutrition. Once all the timing modules were back at the village, results were tallied and presentations were underway. Congratulations to all our competitors, including the following place-getters:

A full list of results and details can be found here: http://www.wagravityenduro.org/?project=round-2-2015-2

Finally, without our volunteers, this event could not be as big or successful as it was, so a huge thanks goes out to: 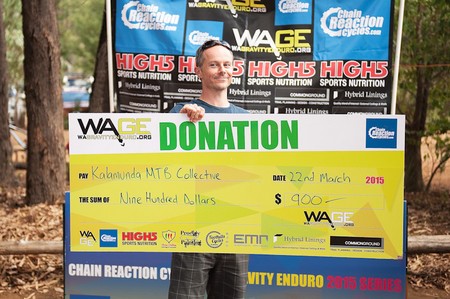 Lindsay Alsop of the Kalamunda Mountain Bike Collective accepting the cheque from WA Gravity Enduro for $900!

Once again, we are pleased to donate 10% of your rider entry back to the course, to assist with sustainable racing and trails!

The next round is on the 10th of May at Golden Grove in Chittering. Series sponsor Three Chillies is planning the course with input from volunteers with XC and DH backgrounds. This is a private course with some exciting descents, with plenty of new surprises thrown in for the regulars. Get excited ladies and gents as this round is going to go off like a firecracker on new years!!! 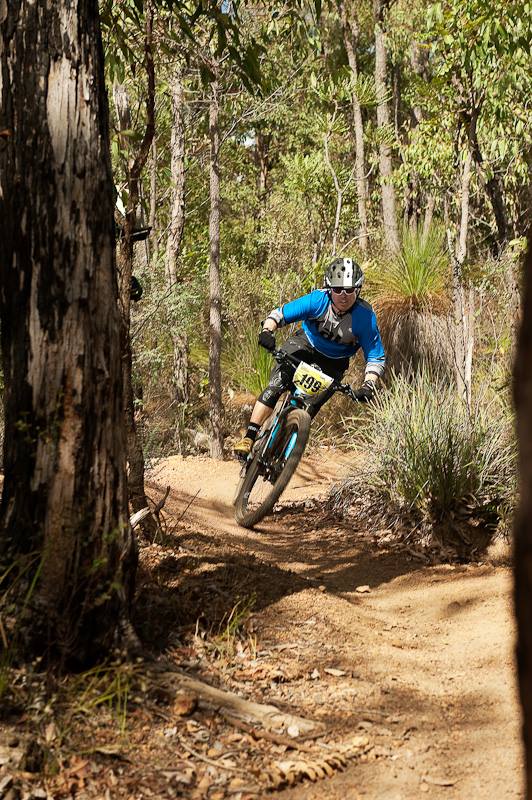 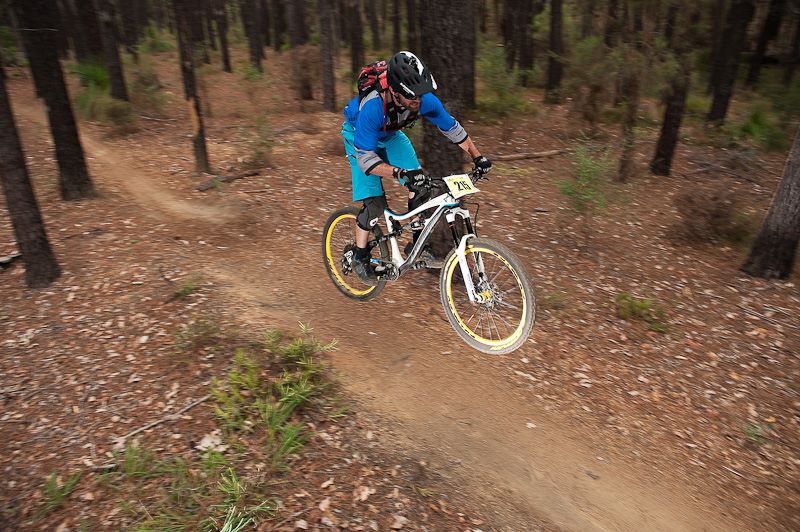 The man behind round 6 and Kalamunda Cycles team rider Devin Stafford on his way to 1st in the Male Masters. _pic:Matthew Farrell 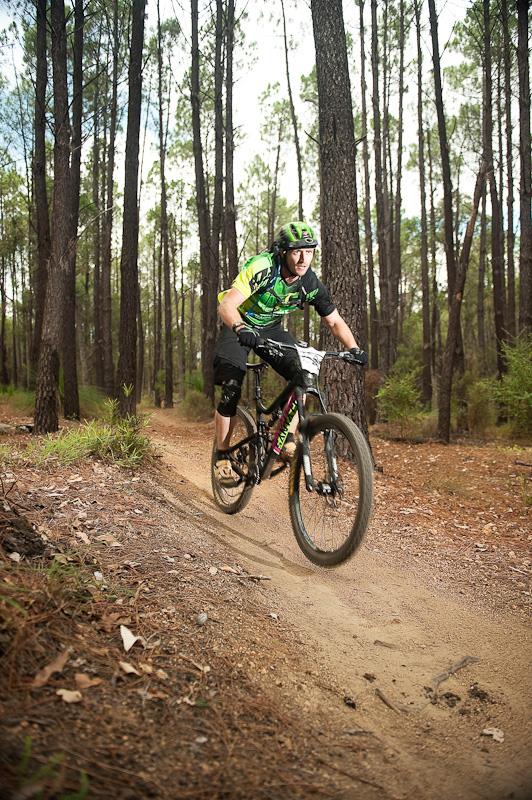 Sam Temple on his new black’n’pink 😉 Bronson. Cracking the top 10. Training for the Mega Avalanche is paying off. _pic: Matthew Farrell 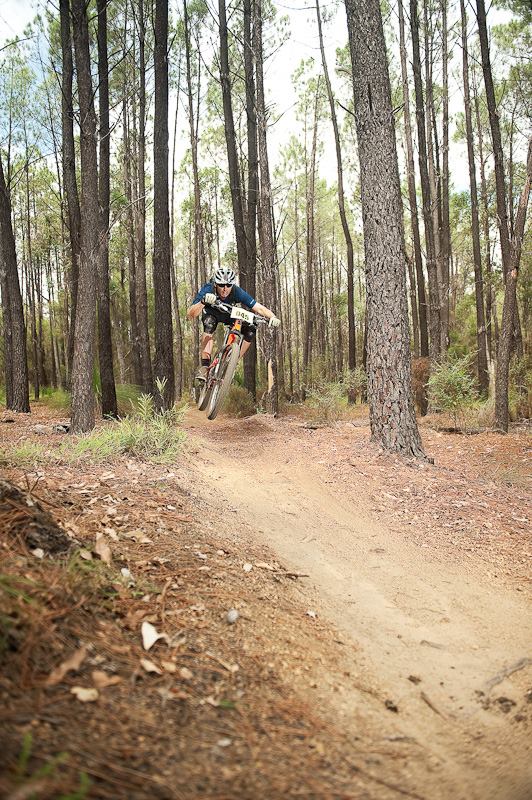 Borrowed bike, no problems. Rich Blair on his was to a solid result. _pic: Matthew Farrell 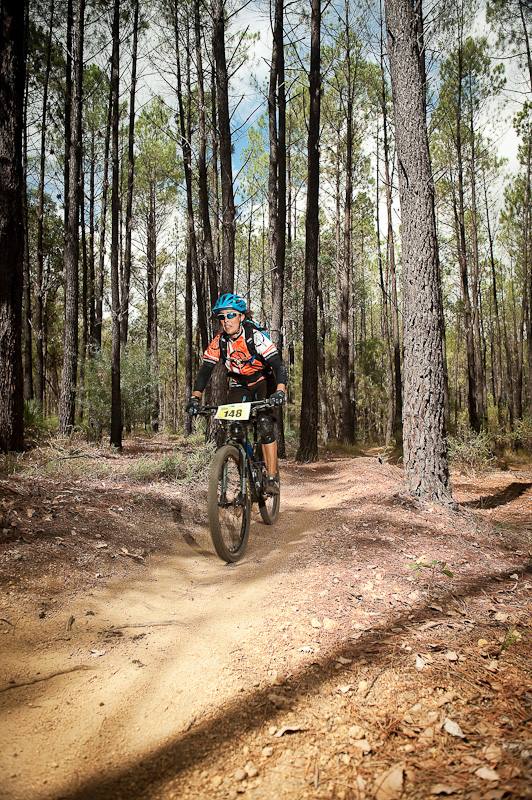 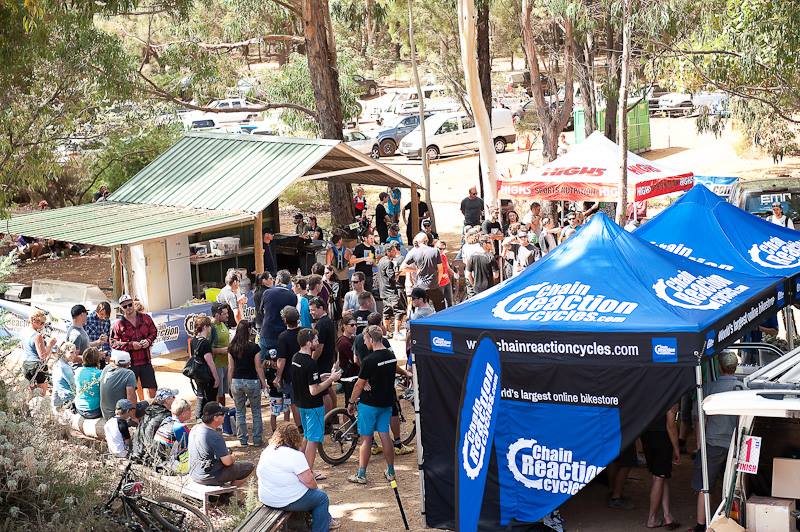 Just half of the bustling race village post race. Good times being had. _pic: Matthew Farrell