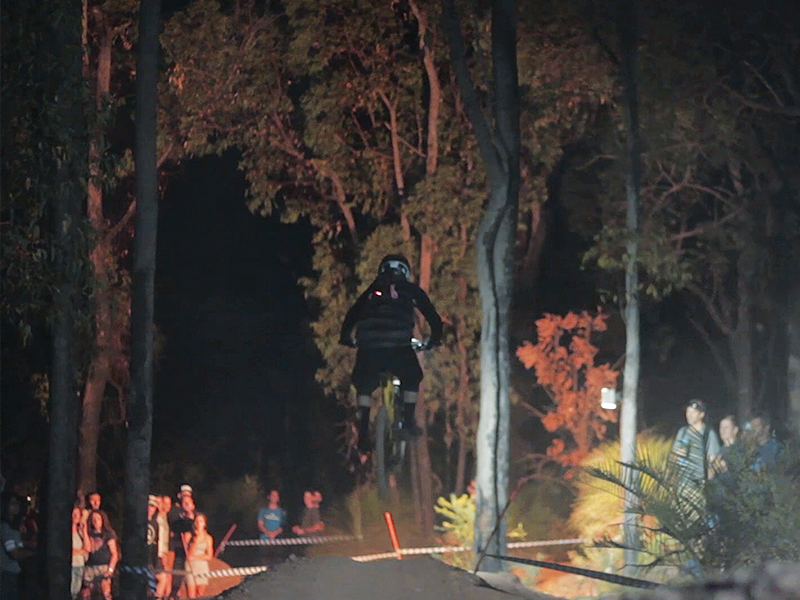 We are always trying to improve and try new things, and Round 1 2016 at Kalamunda was certainly the testing ground! We dived in to 2016 with our eyes closed… or at least in the cover of darkness with flashes of bike lights and disco balls!

166 registered and equally mad competitors signed up for the CHAIN REACTION CYCLES WA Gravity Enduro first night race and the conditions couldn’t have been any more perfect! With the 2016 series starting early on in the year [Saturday, February 24th 2016] in an attempt to evenly space out the 6 race series, we knew it was going to be warm so to beat the heat of the day (which was hovering around 35°C on the day), we tried something new and planned to race at night which brought calm, humid, warm and dusty track conditions. 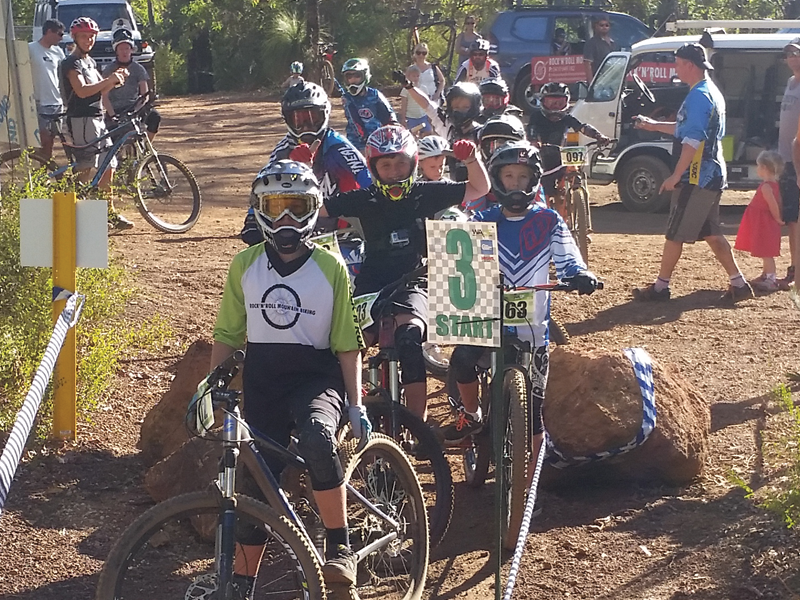 The inaugural WAGE Wippets for first down the course and for their safety, we had the under 13’s racing from 4:30pm tackling two laps of Judderbars through to Alchemy, where the ROCK ‘N’ ROLL MOUNTAIN BIKING shuttle was waiting for a lift to the next stage. With the youngest competitor Charli Holmberg of the tender age of 8, she kept her Mum defending her line to avoid being overtaken! With most Wippets new to the Gravity Enduro racing format, we kept presentations informal and ensured fun was the goal of the day. Congratulations to the inaugural WAGE Wippets!

Thanks to Darren S. who compiled this great video of the WAGE Wippets!

And onto the main race.

The main 4 Stage Race kicked off with race briefing at the Calamunnda Camel Farm on dusk at 7pm. Once competitors were stocked up with HIGH 5 SPORTS NUTRITION, they were guided up the shortest and easiest route to Mt Gunjin. As usual, we try and keep the Elite competitors racing in a different stage order to assist them in having a clear and uninterrupted race (at least during the start of the event) and they peeled off the climb to Mt Gunjin by racing down Mercury Street first. This stage was later deemed a ‘warm up’ and results were not included to ensure consistency and accuracy among the racing group. From there, The rest of the field headed straight up to Mt Gunjin and flew down any stage they wanted in a consecutive order (i.e. 2, 3, 4, 1 or 3, 4, 1, 2, or 4, 1, 2, 3). This consecutive order helps evenly distribute the competitors and helps marshals account for the groups who pass through based on the last rider. 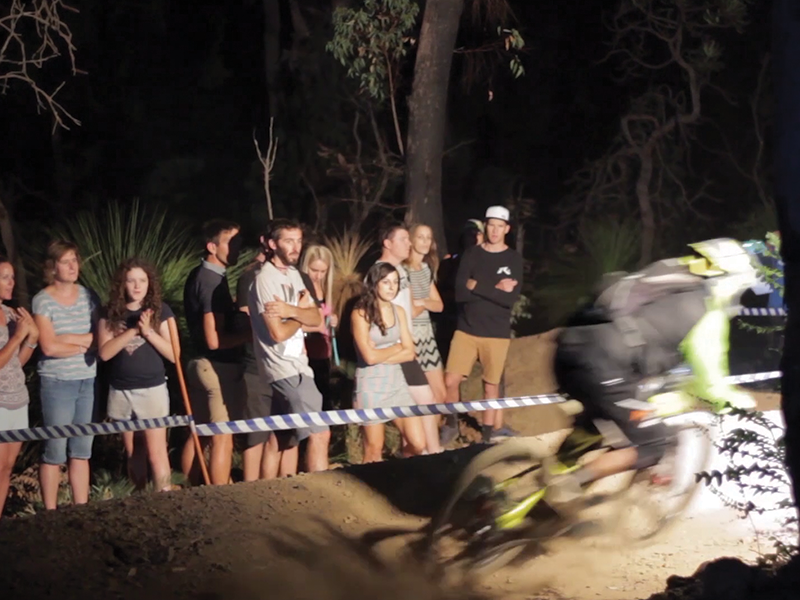 Stage 2: Lazarus. A short and sharp 607m stage descending 51m showed that Sam RUBERY can put the power to the ground pretty hard with the fastest time of the night with a 01:48 with NORTON, PEARCE, KIRBY, ROGERS and MELLISH nipping at this heals for the overall stage time, with the youngster Jessie MORGAN only a few seconds back, and Holly BAARSPUL clocked in the fastest time for the females with a 02:21 followed by Sandra CONNOR with a 02:35 and Leonie BURFORD with a 02:24. 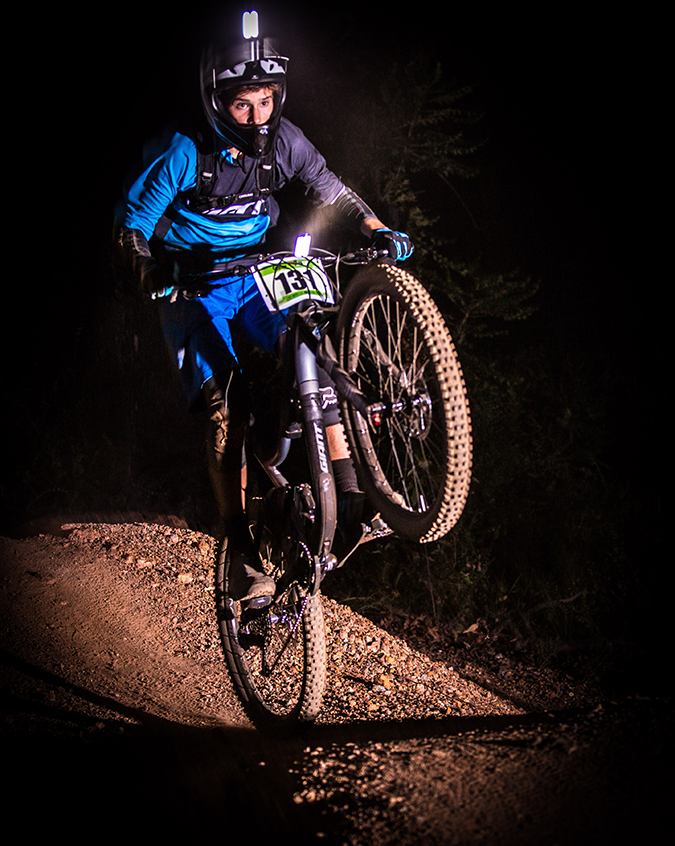 Stage 3: Loco En El Coco (or crazy in the head): takes in some fun timber berms and was the highlight for the spectators with the multiple jumps just after the powerlines… 1343m in length and a total descent of 113m and 182m flat, giving the competitors with a little more pedal endurance to keep pushing on the flat. Scott MELLISH was the man to beat with a 03:09 closely followed by Sam RUBERY and Blake PEARCE 1 second behind. For the females, Holly BAARSPUL was in a league of her own clocking in 04:02 followed by Leonie BURFORD 8 seconds later with a 04:10. 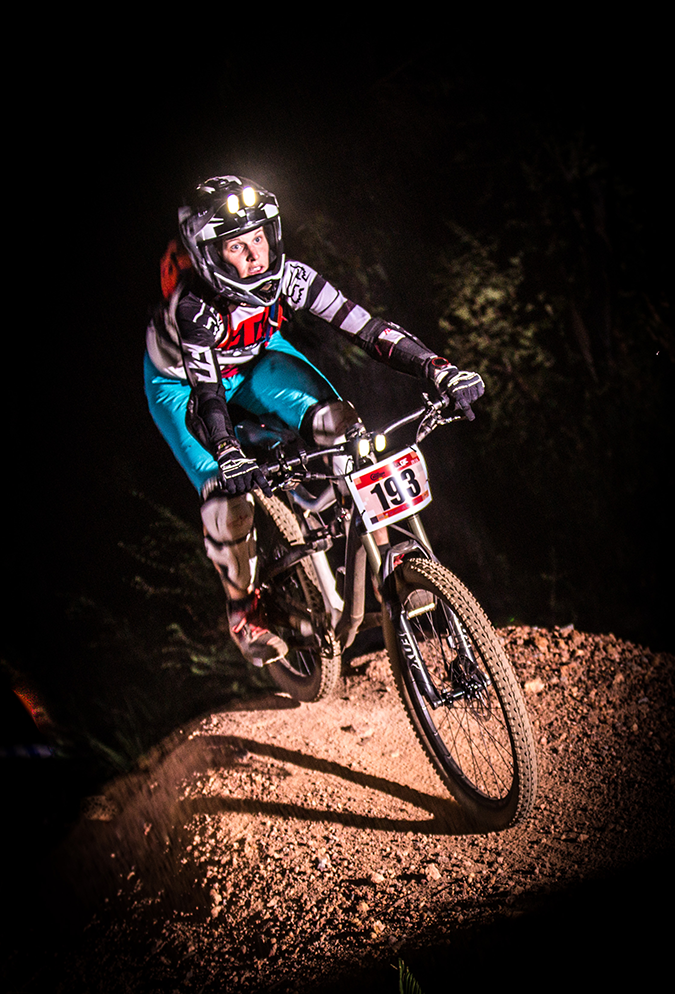 And finally, competitors tackled Judderbars through to Alchemy. Quite a long and demanding stage incorporating descent for 89%, climb for 4% and flat for 7%, it was the longest stage of the night totalling 2345m. Blake PEARCE clocked in the fastest time of the night by 5 seconds with a 05:29 followed by Devin STAFFORD, and 1 second later, Sam RUBERY and Wayne ROGERS came through. For the females, it was tied with Leonie BURFORD and Holly BAARSPUL with a 06:48 followed by Kamlia AMBROZEWICZ with an 06:51. 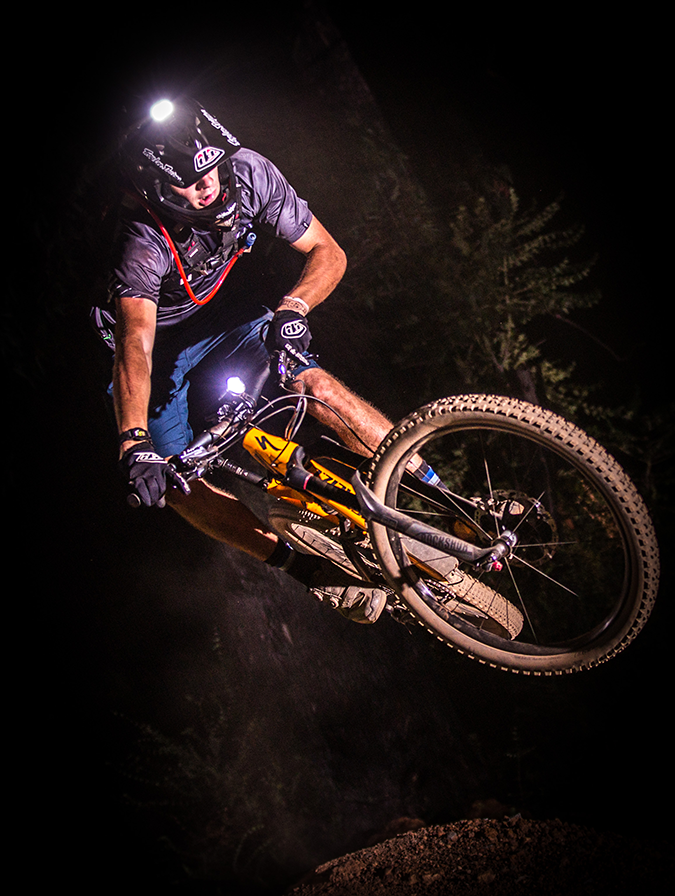 Blake Pearce taking out the Male Elite in style 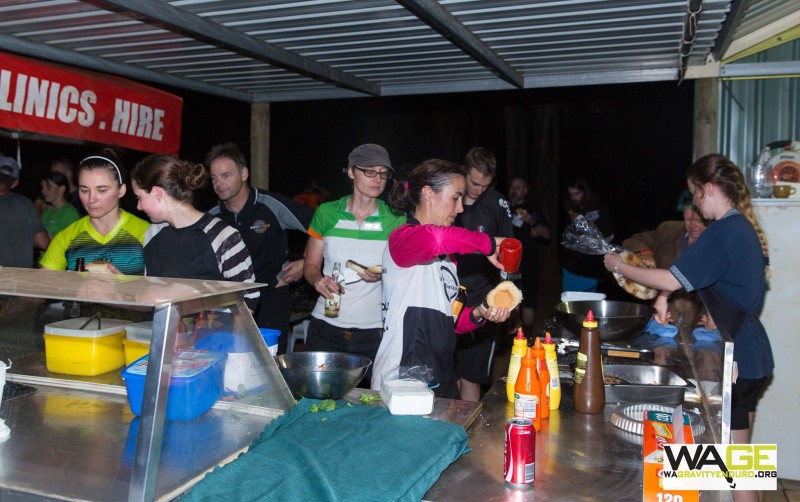 Food and drink after the race back at the village 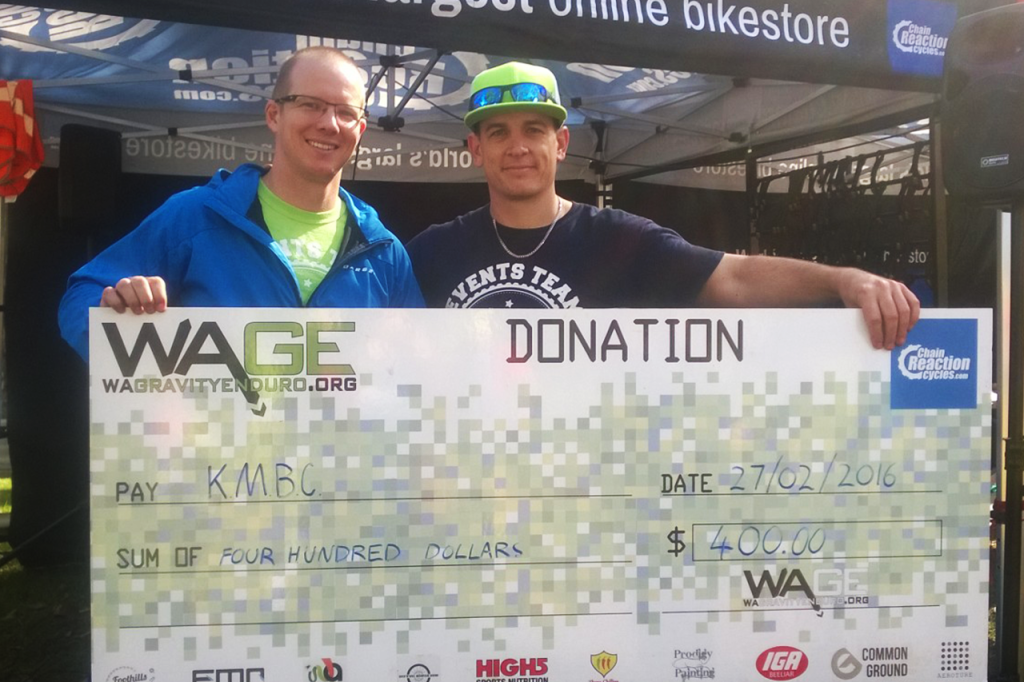 We love donating back to the local trails!

Once the serious/not so serious side of things was taken care of, it was back to the race village for some R & R! Once again, WA Gravity Enduro offered competitors a free hamburger with special thanks to the CALAMUNNDA CAMEL FARM for taking carriage of the preparation, and if that wasn’t enough, the licensed bar area was a refreshing thirst quencher in the humid conditions and gave everyone a little breather as they awaited race results. 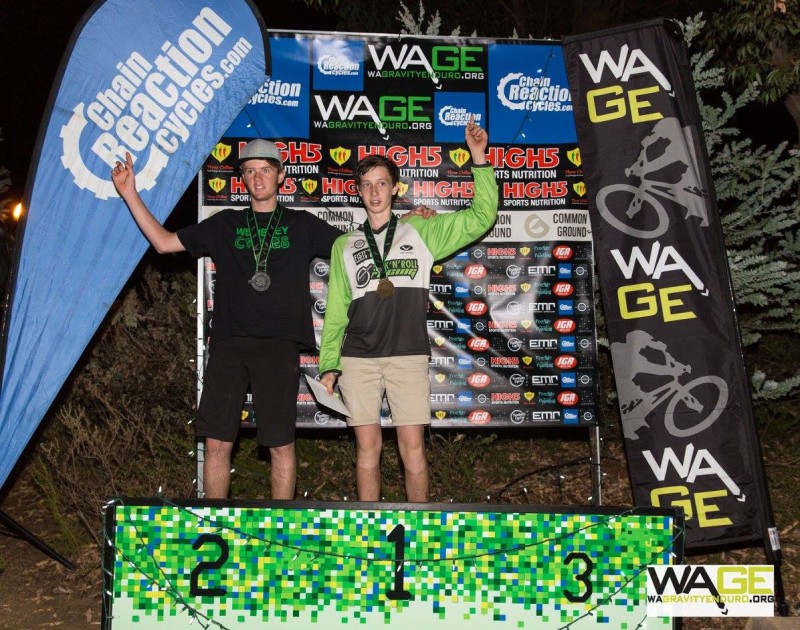 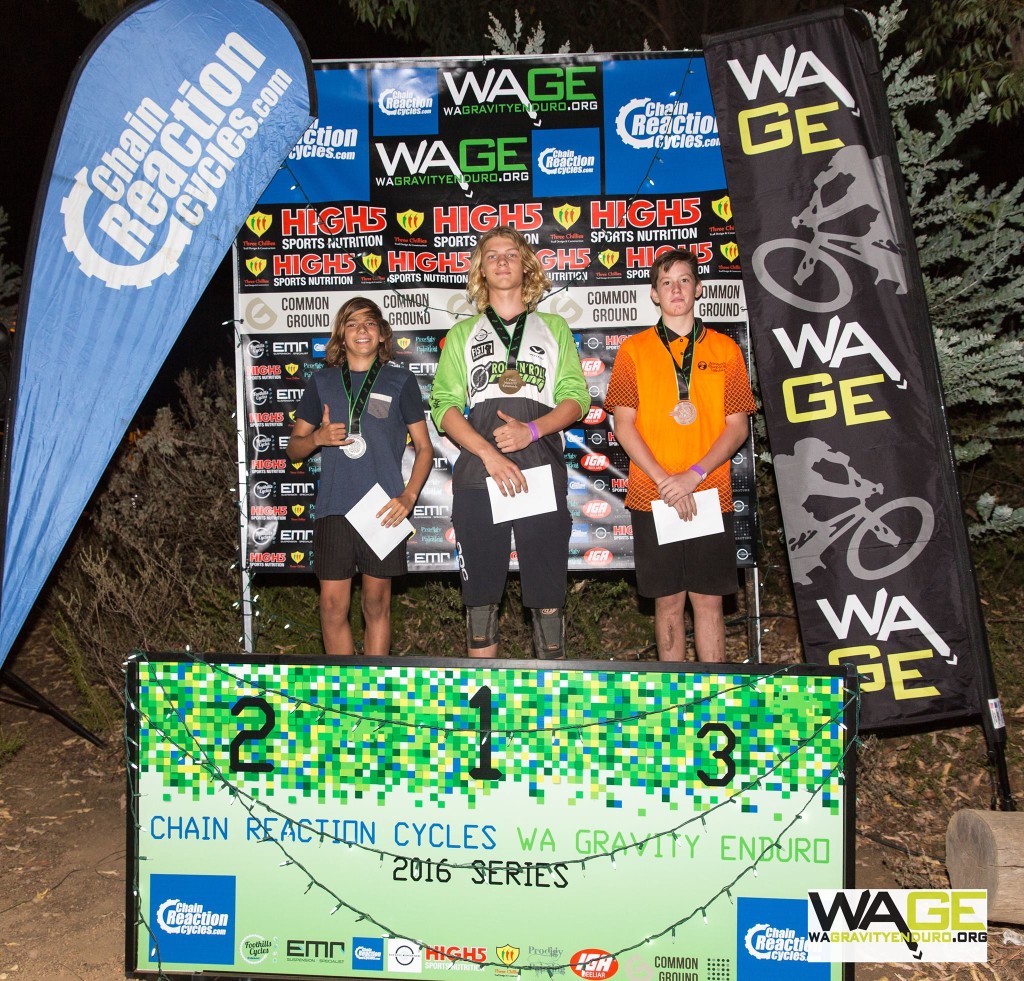 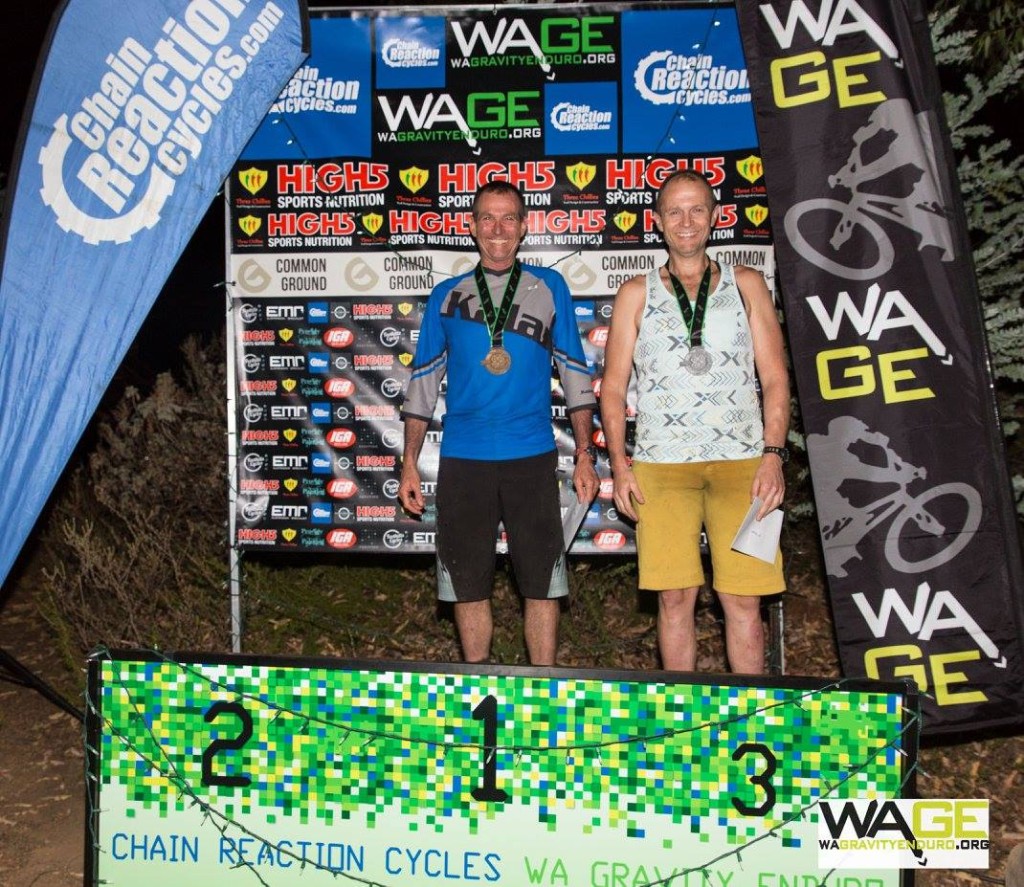 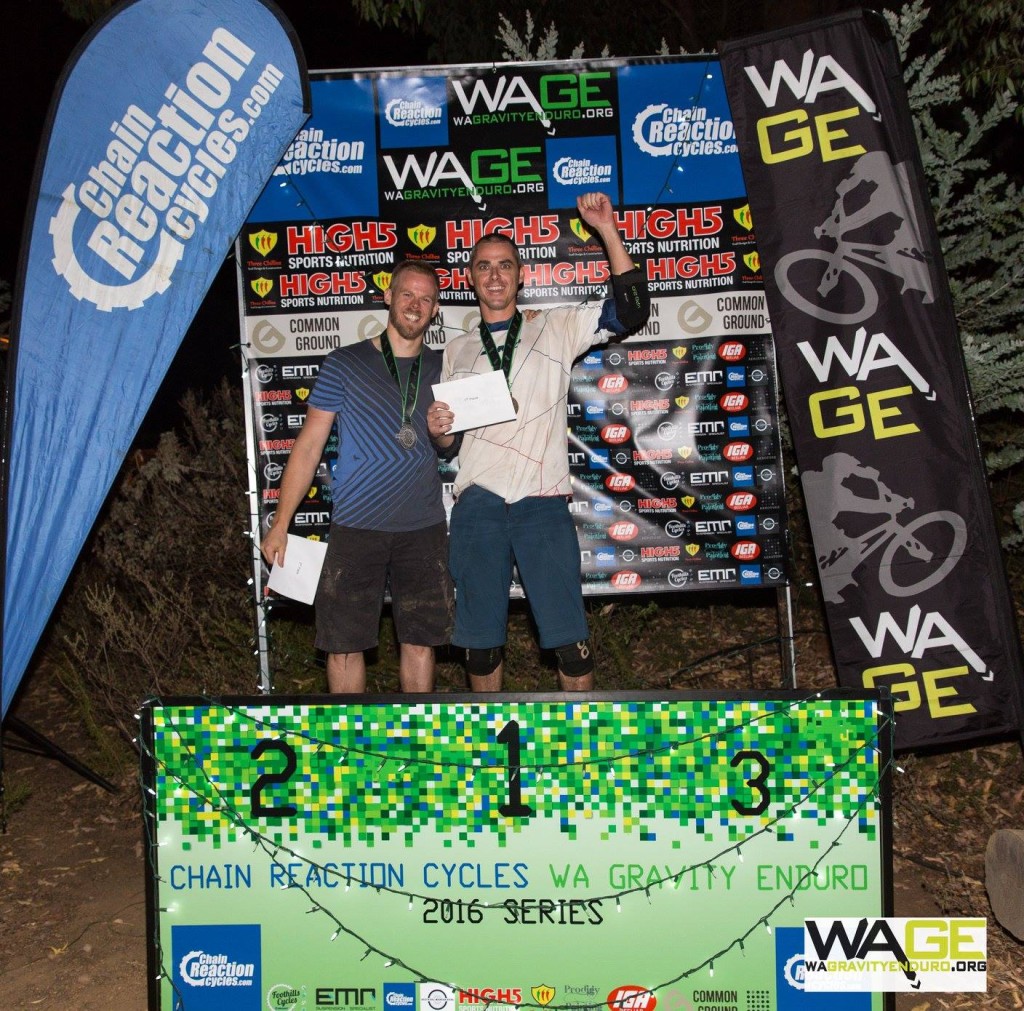 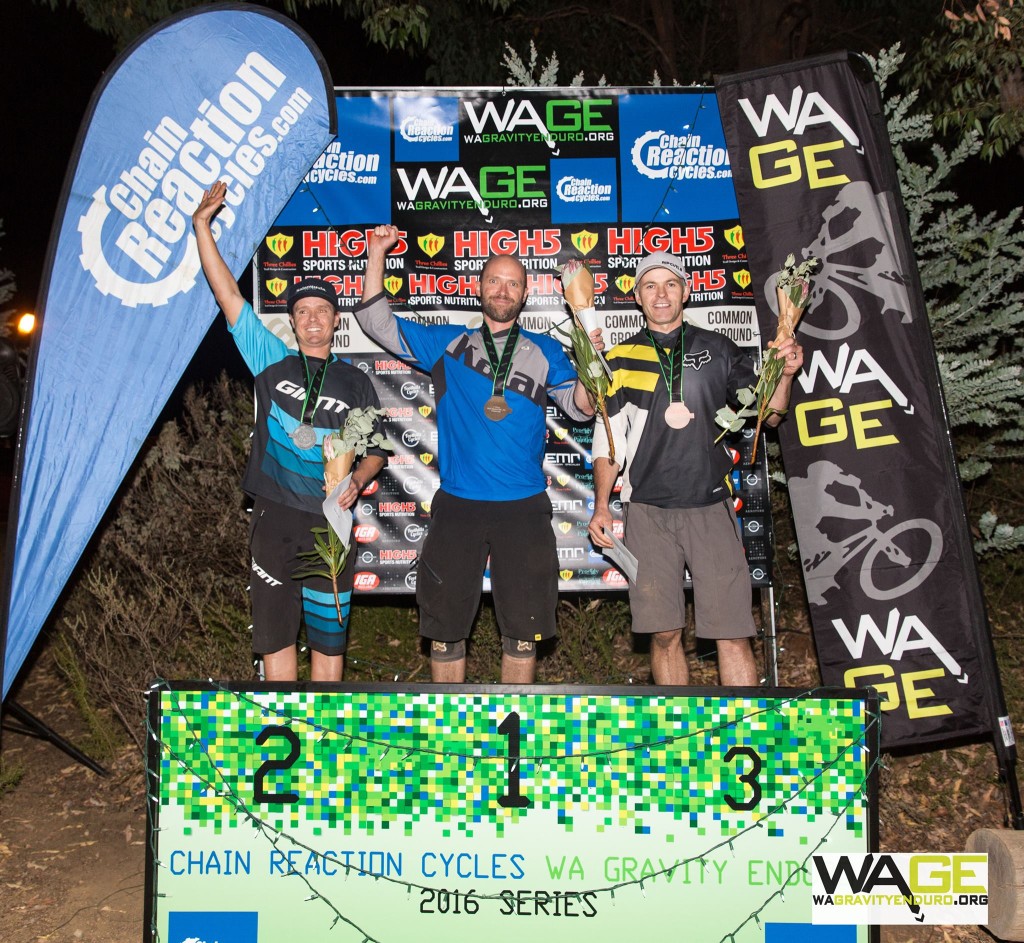 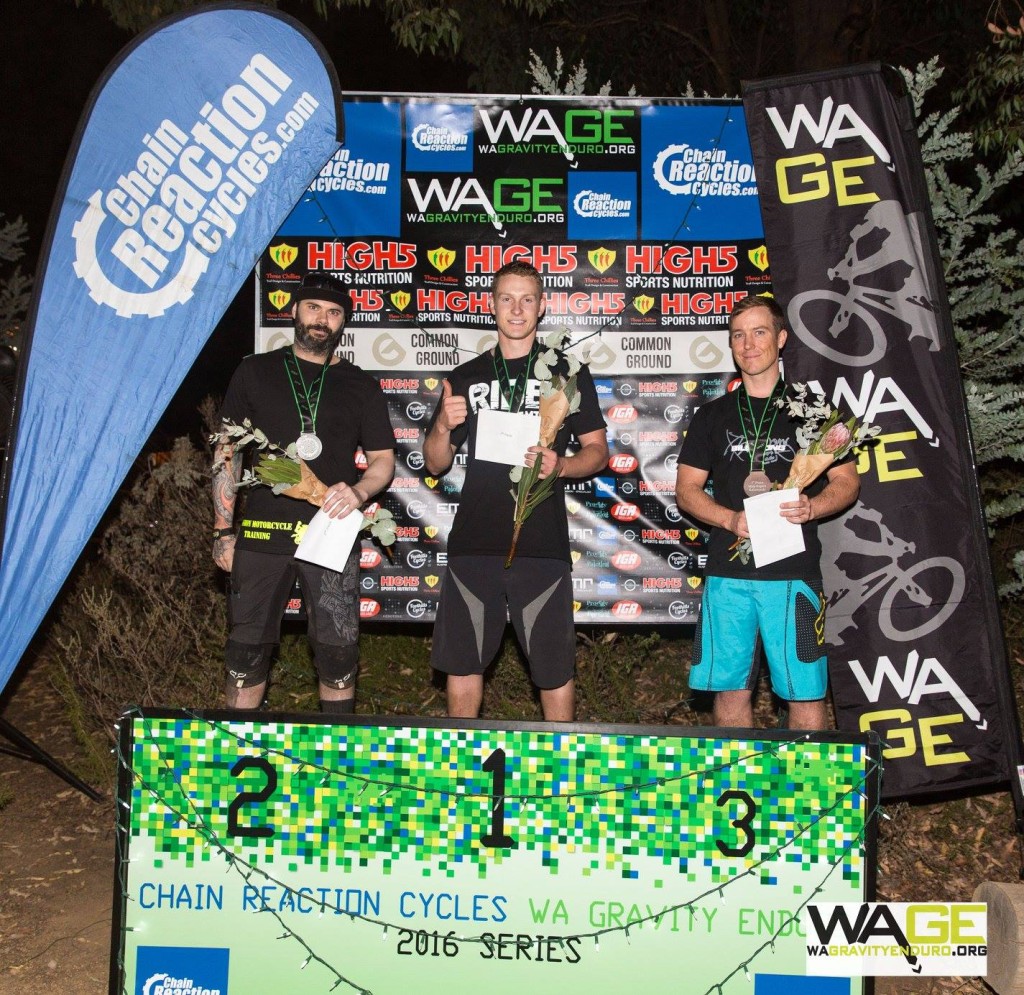 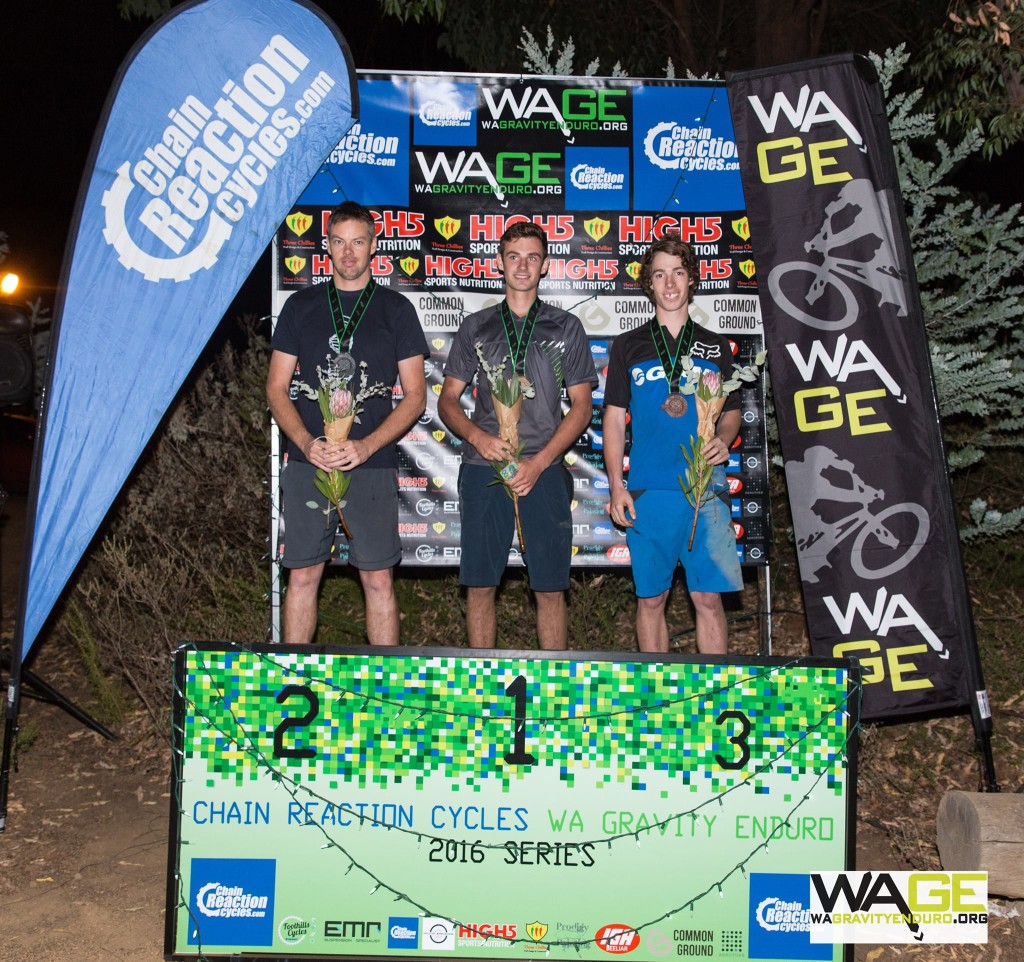 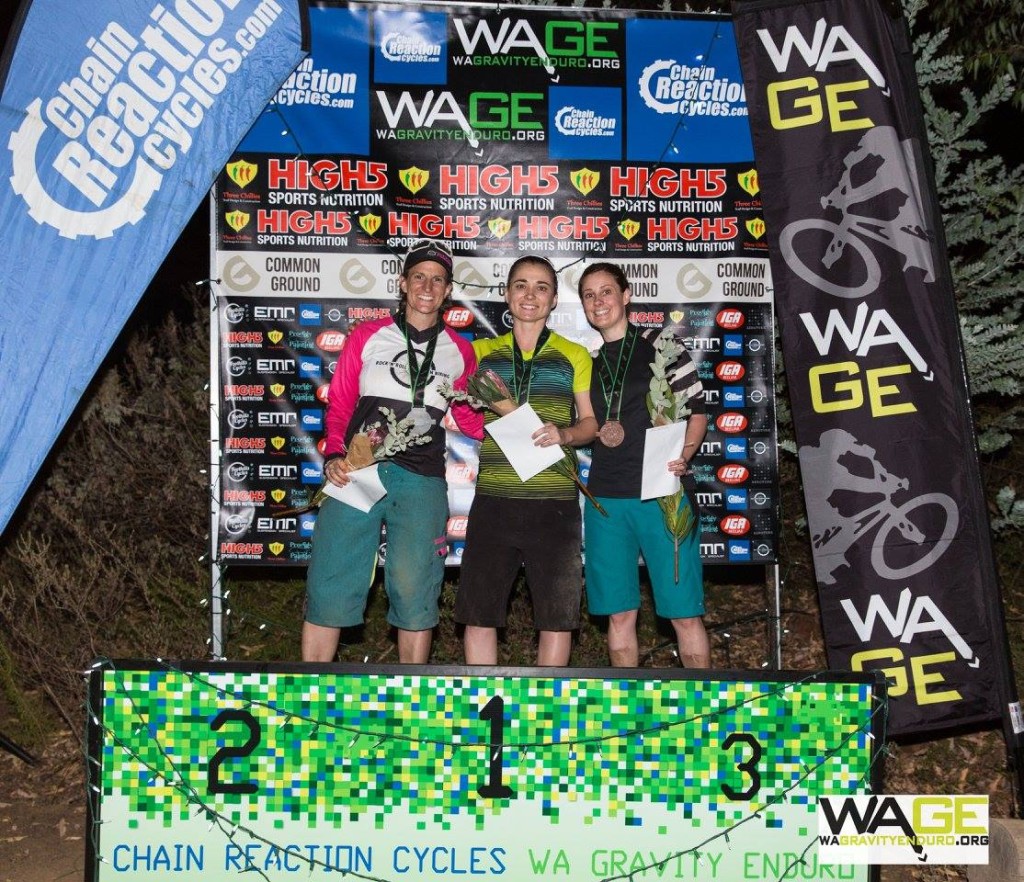 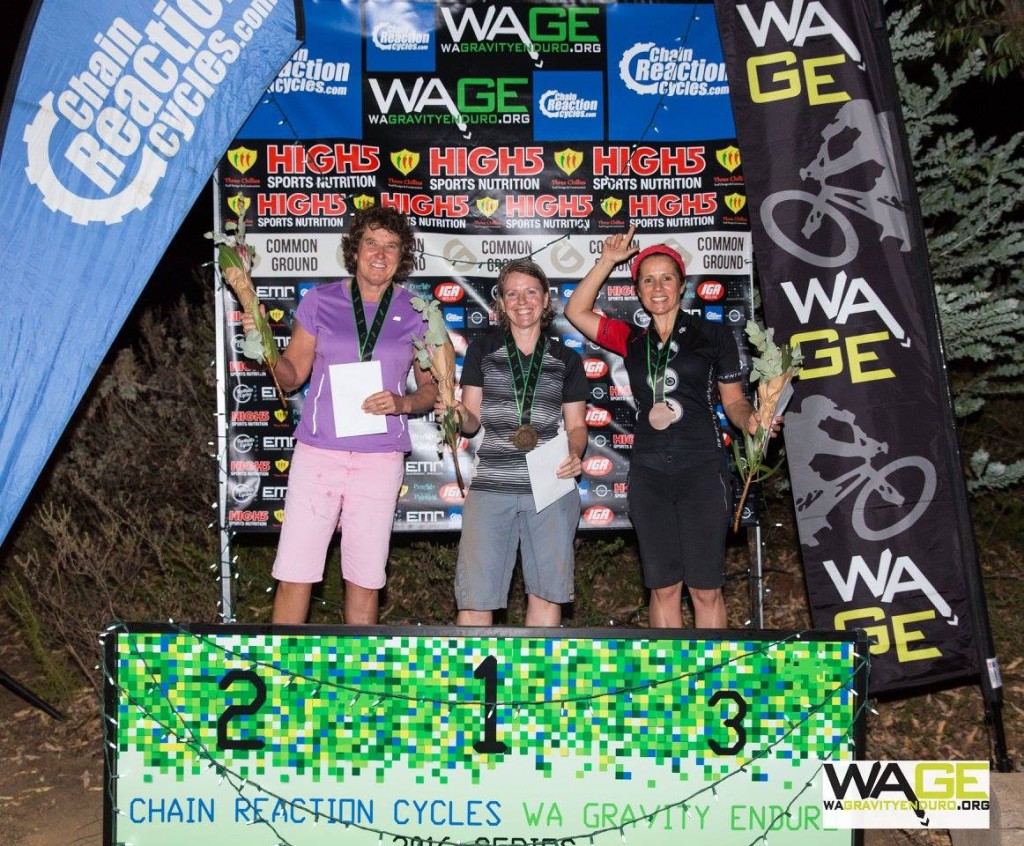 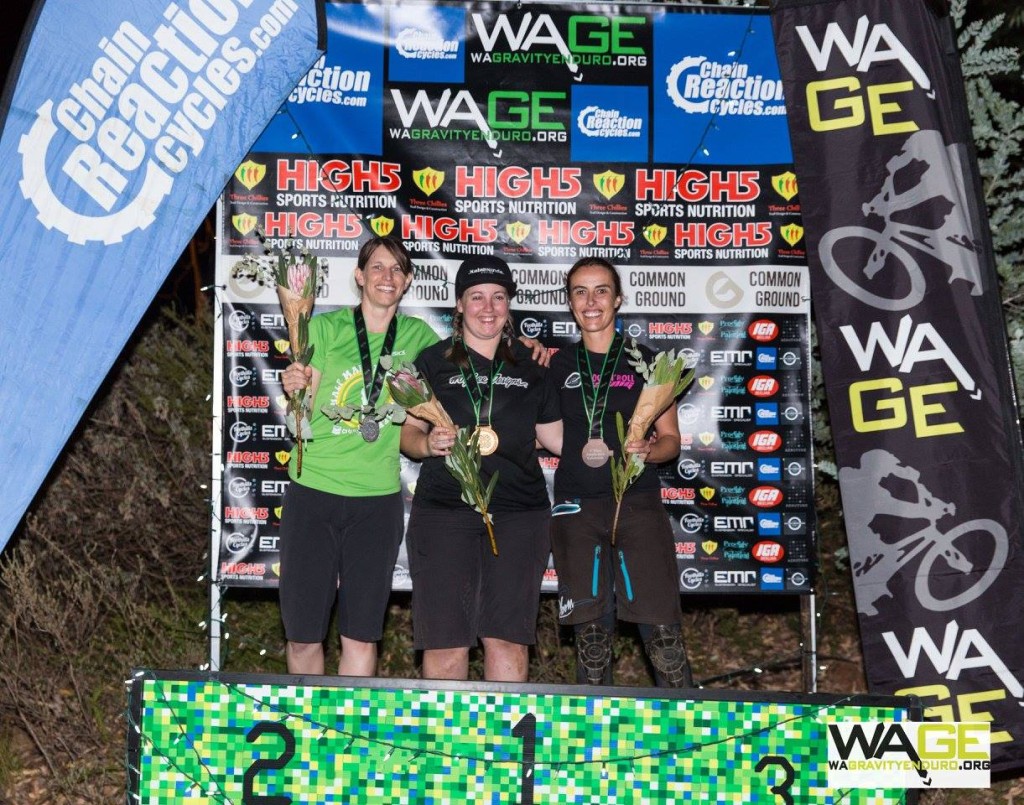 Full results can be found here

A video of the night can be found here

Without our awesome marshals dedicating their time whether big or small, we could not hold these great events, so a huge thanks to the following people in no particular order: Chad D, Terry C, Peter W, Robyn L, Stephan B, Russ B, Andrew S, Ryan D, Brian S, Vanessa J, Fane R, Claire J.

And thanks to our media personnel: Darren S. who compiled this great video of the night and Michael H. from AEROTURE who took some awesome shots available here.

Of course, thanks to our sponsors and supporters:

and thanks once again to the support from the KALAMUNDA COLLECTIVE MOUNTAIN BIKE CLUB, CALAMUNNDA CAMEL FARM, DEPARTMENT OF PARKS AND WILDLIFE, WATER CORPORATION and SHIRE OF KALAMUNDA.