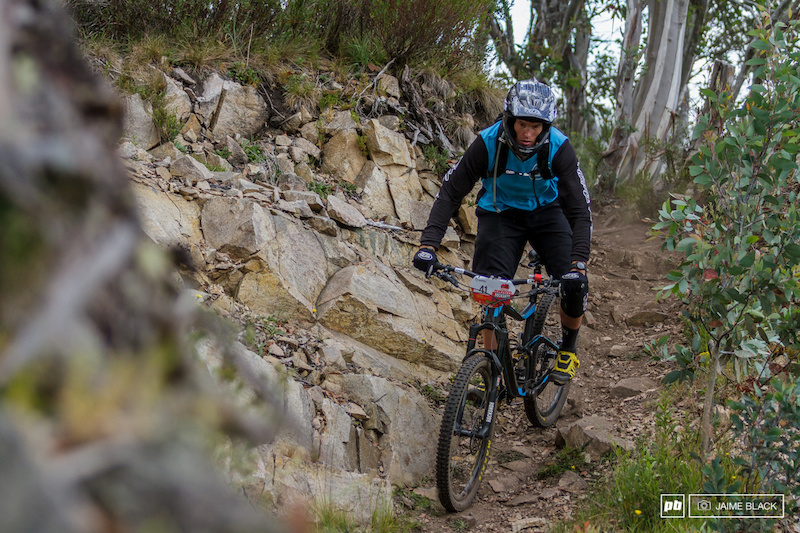 I was fortunate enough to head up to the Sram/Rockshox Enduro challenge at Mt Buller which also happened to be the 1st round of the National Enduro series over the weekend, and what a great race it was. The field was stacked with big names dropping all over the show. The tracks were spot on and the weather turned on too!

I flew into Melbourne a couple of days before racing and bunked with WA local legends Tim Bennet and James Kennedy. We spent a couple of days checking out the tracks and relaxing. There were 6 race stages and roughly 30km, 1400m of climbing and x2 chair lift assisted runs, it was a fair bit to take in and remember lines. While trying not to wreck our selves before race day on Sunday.

By the time Saturday rolled around we were feeling a little tired and decided make the most of the chair lift and save our legs for race day. The atmosphere in town had ramped right up with hundreds of people rolling into the village.

The Prologue kicked off at 3pm Saturday, a basic seeding run that decided where you start the following day. The track consisted of fire road, loamy grass and stairs to finish in the centre of the village. I left the gate about 545pm, I rode like a goose and came in at 33rd with the time not going towards our finish time it wasn’t a big deal. Tim finished 4th and JK 7th in vets and Mike 2nd and Sam 20th in elite.

After a good nights sleep, race day rolled around, feeling pretty nervous for my first race of the season I decided to go for a spin on a track nearby to loosen up, before I knew it I was called up and off down the first stage. It was pretty flat and pedaly, at 4minutes long it was going to burn the lungs. I rode pretty conservatively so I could punch the uphill before the last descent, that didn’t go to plan I was cooked by halfway. It was a delight to drop into the last 200m of downhill and give the lungs a rest. I was surprised and stoked to crack the top ten for the stage.

After coughing a bit of blood and a 15min climb it was onto stage 2 – Misty twist. A narrow track with plenty of switch back 180 degree turns that just seemed to go forever. It was a fairly uneventful run and the lungs and legs were starting to settle. Not feeling too shabby I saddled up and headed off on a 30-40 minute liaison stage to the top of Mt Stirling.

Then we headed into stage 3. Stonefly descent is about 8min of party time. It was fast and fun I loved every minute of it, I pushed pretty hard and had a few hairy moments as I only did one practice lap and I didn’t seem to recall much. I had a bit of fun and stayed upright.

After some food I decided to walk a firebreak to stage 4 – (Clancys Run) and give the legs a rest. After arriving at the top and only a few riders around I dived in while I was still warm. Knowing that I had 2 chair lift runs to go I was feeling good, I knew the stage well and had a good run with a couple of stalls on the tight corners but after a few cranks I was back up to speed.

Climbing off the chairlift we came to Stage 5. Outlaw/Yellow Post was one of the better stages, with plenty of rocks and loose dusty turns. I was like a kid in a candy store, it was good fun on the trail bike I could have happily done a few more laps, but I had to head up and finish the day on the prologue track.

After waiting 20min to get my start on stage 6 I was off trying to lay down some ponies with my chicken legs. Nek minit “ping” my chain snapped about 30metres in. Thankfully 80% of the track was downhill so I wasn’t completely out of luck after a few leg pushes across the flat sections. Bouncing down some stairs I was home with a 64th on the stage anda 16th overall, with a race time of 25:35 just outside my goal of top 15. Tim coming with a 7th, JK 13th in vets (JK walking over the line after destroying a rear wheel), Sam and Mike getting some pre-season training in and laying down a top 5 finish, Mike in at 14th.

It was a bloody good weekend had by all. I want to thank EMS Australia, The crew at Mt Buller and SRAM for putting on a great event. Also thanks the West Aus Lads for an awesome trip!